5 Reasons Why You Should Not Watch Raazi 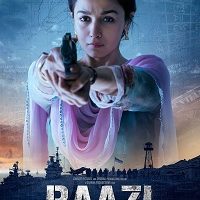 Thanks for visiting! If you're new here, you may want to subscribe to my newsletter. Feel free to post your thoughts in the comments section at the end of the article.

a) Don’t watch it just for Alia Bhatt: You may be a big fan of Alia and nothing is wrong with that, but if you are going to watch this movie only to see Alia Bhatt’s performance you maybe disappointed. You maybe disappointed when you find out that the other actors have acted just as good as Bhatt if not better. Granted that Alia carries the film on her shoulders from start to end with her breathtaking performance, but if you don’t consider the performances of the rest of the crew as highly then you will be doing them an injustice. Arif Zakaria can convey so much emotion with his mere eyes that he does not even need dialogs to drive the message to the audience; consequently, his dialogs in the film are few but forceful; although a minor character, his death makes you sympathize with him. Equally powerful are the performances of Ashwath Bhatt (who can hardly come to terms with the fact that his loyal servant left the house without telling anybody), Shishir Sharma (as the grieving father and the commanding officer hurt by the treachery of his own people), Jaideep Ahlawat (as the cold-hearted trainer of Sehmat who is not completely heartless) and Vicky Kaushal as the ‘nice guy’ cum loving husband of Sehmat (assuming that the actual husband suffered from performance anxiety that is; I have not read the original story mind you but I gotta say this, if I had a wife like Alia waiting for me in bed the first thing I would do is to forget all ‘decency’ and jump into bed). Rajit Kapoor shines in his small role as usual. The ladies in the supporting cast don’t have much to do apart from acting ‘mushy’.

b) Don’t watch it if you like loud party music: The music in this movie is as soft as it gets; I actually like the background score for two reasons: firstly because it is not jarring and also because it goes well with the atmosphere of the story. I did not like the songs much however, except for the wedding song. I long for days when music would become as good as it was before millennium; in those times the quality of the movies used to be poor; nowadays the quality of the movies has gone pretty high but the same cannot be said about music.

c) Don’t watch it if you hate Pakistanis: There is no dearth of Bollywood movies which portray Pakistanis as evil monsters with no feelings. This is one of a kind of movie which portrays our neighboring country in a more sympathetic light. On one hand you can call the Pakistani officers in this movie ‘villains’ as they are out to ‘crush India’ but when you see their emotional turmoil and that the reason why they do what they do are akin to the reason why Sehmat is doing what she is doing (the reason being: patriotism) your heart is bound to melt.

d) Don’t watch it if you like only Action movies: I honestly found some of the promos touting this film as an ‘Action thriller’ to be misleading. I expected a lot of violence and shootings. There is action but it is minimal and not gratuitous; killings don’t happen at the drop of a hat. The movie is fast-paced no doubt but the focus of the entire movie is on what people on either side of the border go through when a war is on. After watching it I can call it a Drama or War movie, but it is definitely NOT an ‘Action’ movie.

e) Don’t watch it if you like mindless romantic drama: This movie portrays reality as you see it; thus there is very little romance in it at all, and thank god for that otherwise I would have slept off during the second half (when did you ever notice romance happening in real life the way romantic movies portray it?). The plot-line is quite serious so people who enjoy only mindless rubbish should not waste money on this movie. It is just like Mir says at the end: this is what happens during war, and when a war is on, nothing else matters.